Developing the next generation of entrepreneurs

HONING an entrepreneurial mindset is an important skillset for future professionals to gear up for careers in today’s disruptive, globalised world of business and technology. This skillset can be nurtured from young and universities are taking note.

Asia Pacific University (APU) aims to increase the number of meaningful and sustainable startups amongst students with the formation of the Enterprise@APU programme.

This initiative aims to create entrepreneurial mindsets and anti-fragile characteristics through a series of weekly and monthly webinars and online events that engage entrepreneurs and start-ups to share real-life experience. Design is often a silent catalyst and driving force in product innovation. The fusion of design thinking and creativity generates positive experiences for users in their daily routine. Most of the product designs are catering to the very specific 10% in achieving marketability. To create opportunities for the 90% statistic of people that have limited access to the basic amenities of life, designers always try to explore innovative solutions that can solve real-world problems. READ MORE AN application (app) that connects donation centres with the community and that enables the participation of donors and volunteers won over the judges at a national coding competition recently. 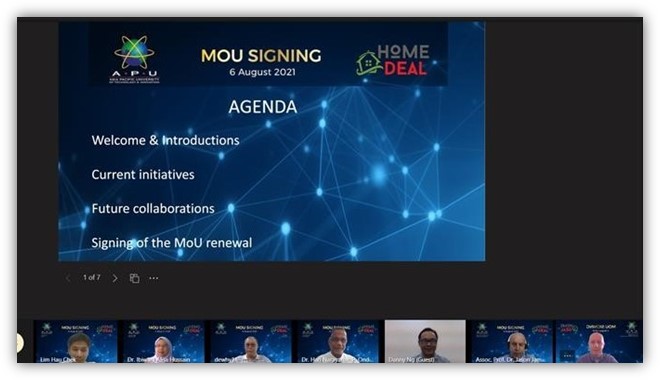 The APU – HomeDeal Collaboration provides an opportunity for APU students, in specific e-Commerce modules, to experience a real-life e-commerce business scenario within a supportive classroom environment with no risk or capital investment.

The E-Commerce Business Project has 2 objectives: 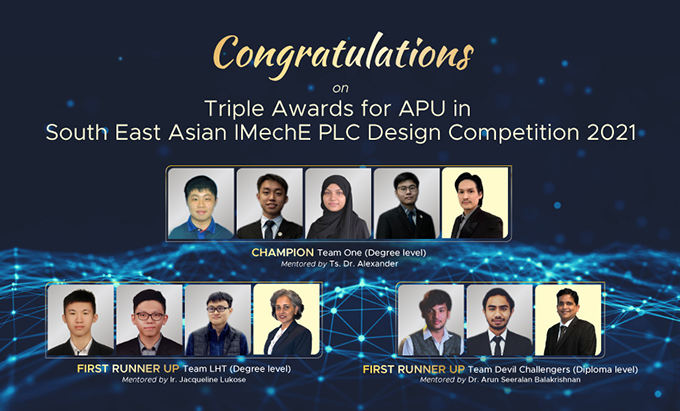 AS Malaysia’s digital content market continues to grow, the country now houses some 100 animation companies, 122 visual effects (VFX) companies, 57 games and interactive media companies and 93 new media and platforms companies – but with a vibrant digital ecosystem, there is much room to sharpen expertise and talent.

APU’s School of Media, Arts and Design (SoMAD) offers courses and programmes in animation and VFX at Diploma and Bachelor Degree levels, enabling students to specialise in modelling, animation and composite-based applications in the creation of character filmmaking. 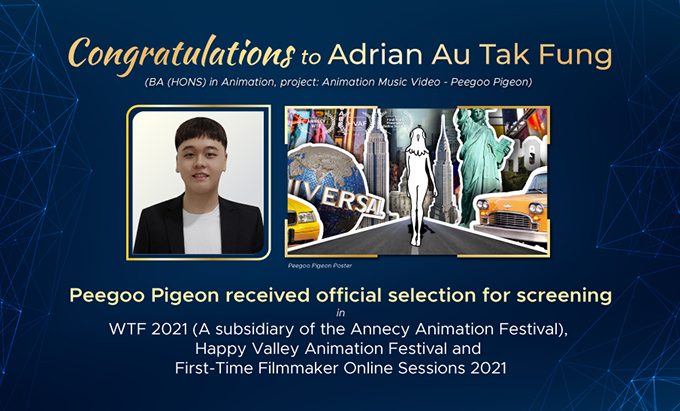 The Peegoo Pigeon clip features a humanoid pigeon travelling around the world from a country to another country and there are scenes in between the shots where Adrian portrays some entertaining short story.

London, Mexico City, New York, Paris, Rome, Sydney, Shanghai and Tokyo are among the fascinating destinations in the world that appear in the 70-seconds short animated music video. READ MORE 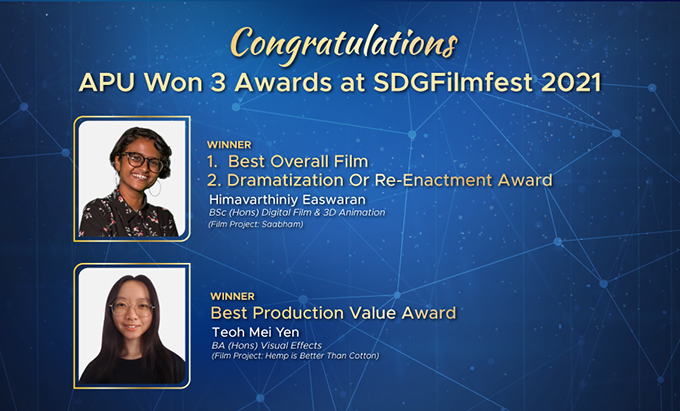 A hat-trick of awards and joy for Himavarthiniy Easwaran and Teoh Mei Yen as they came out tops amongst more than 83 competitors including from the United Kingdom, Indonesia, Cambodia. Both the School of Media, Arts and Design (SoMAD) students secured 3 prestigious awards (among 7 categories of awards) at the SDGFilmfest 2021 – the best performance amongst all participants!

First established by De Montfort University, Leicester, UK & the Jakarta campus of the London School of Public Relations (LSPR) in 2018, and funded by the Global Challenges Research Fund and LSPR, the SDGFilmfest 2021 was held virtually on June 25, 2021. READ MORE

Two APU teams celebrated success at the Penang International Invention, Innovation and Design 2021 (PIID 2021) walking away with a Gold and a Silver Medal for their innovative ideas. The virtual challenge was an annual effort organised by the Research Management Unit, UiTM Penang to serve as a platform for academicians, industries, and students to highlight innovation, invention, and ideas which is in line with the government’s policy to encourage research activities in Malaysia. READ MORE 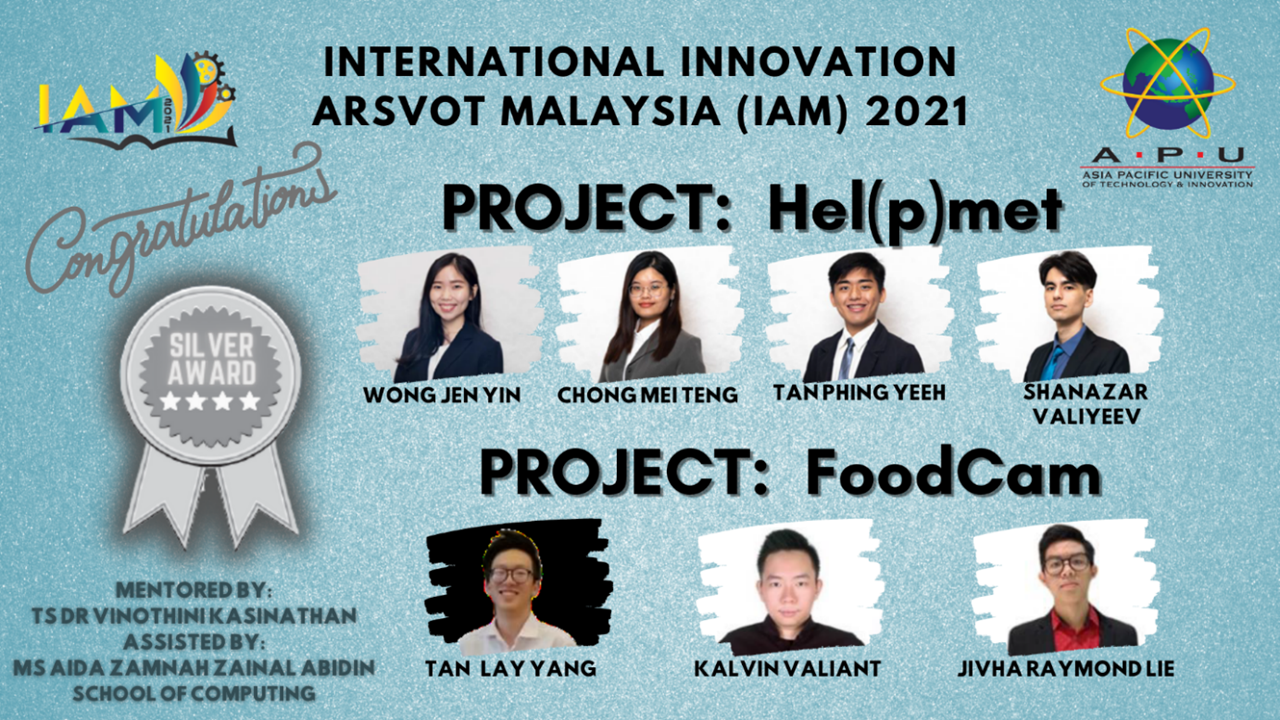 Two Silver Awards At Once

Our students managed to grab 2 Silver Medals back home in the International Innovation ARSVOT Malaysia (IAM2021) virtual competition organised by ARSVOT along with several collaborating partners. “DESIGN FOR HUMANITIES”, was the theme for the IAM2021 exhibition this year which highlights innovation in teaching and learning, innovative products, and a medium to share expertise in humanities. READ MORE 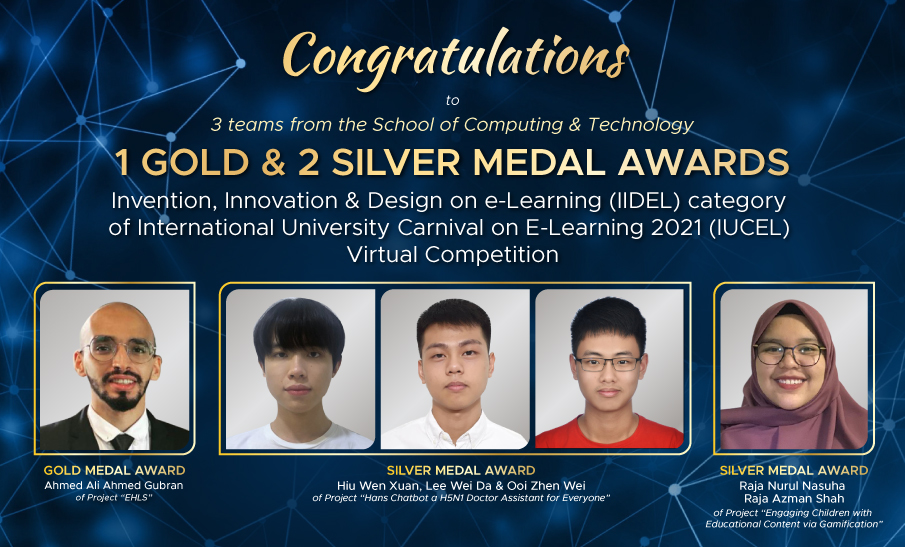 On 15 June 2021, 3 teams from the School of Computing & Technology, participated in the Invention, Innovation & Design on e-Learning (IIDEL) category of the International University Carnival on E-Learning (IUCEL) 2021 Virtual Competition and emerged with a Gold Medal and two Silver Medal awards for their e-learning projects. The 3 teams competed against 200 teams from various higher learning institutions. READ MORE 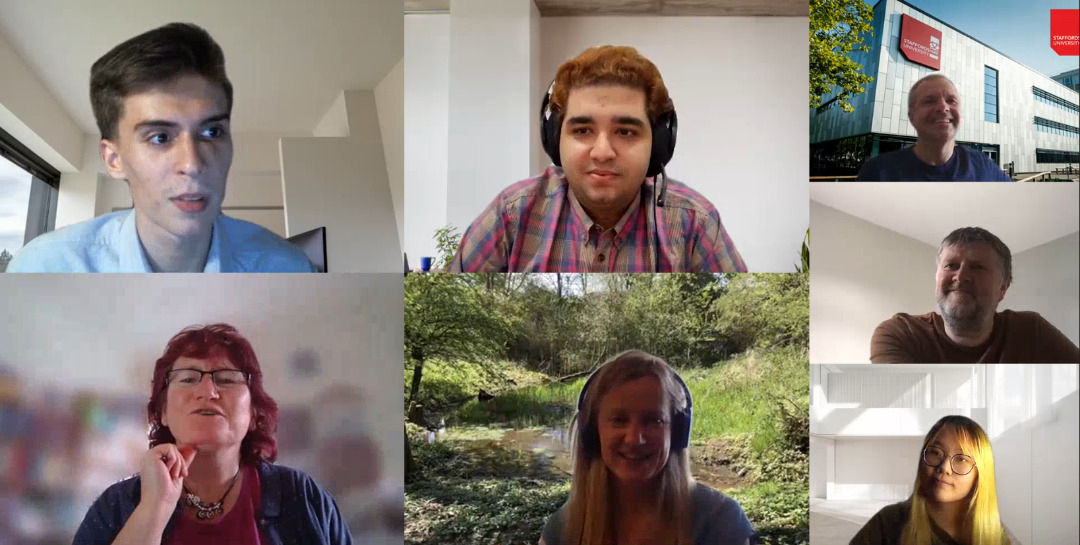 This pandemic has made us value green spaces and biodiversity more than ever and highlighted the importance of connecting with nature. Recognising this, Staffordshire University (SU), UK organised a collaborative cross-student project with Asia Pacific University of Technology & Innovation (APU) to raise awareness of sustainability as a platform for students to engage and collaborate creative ideas for the Great Green Sustainability Challenge 2021. READ MORE 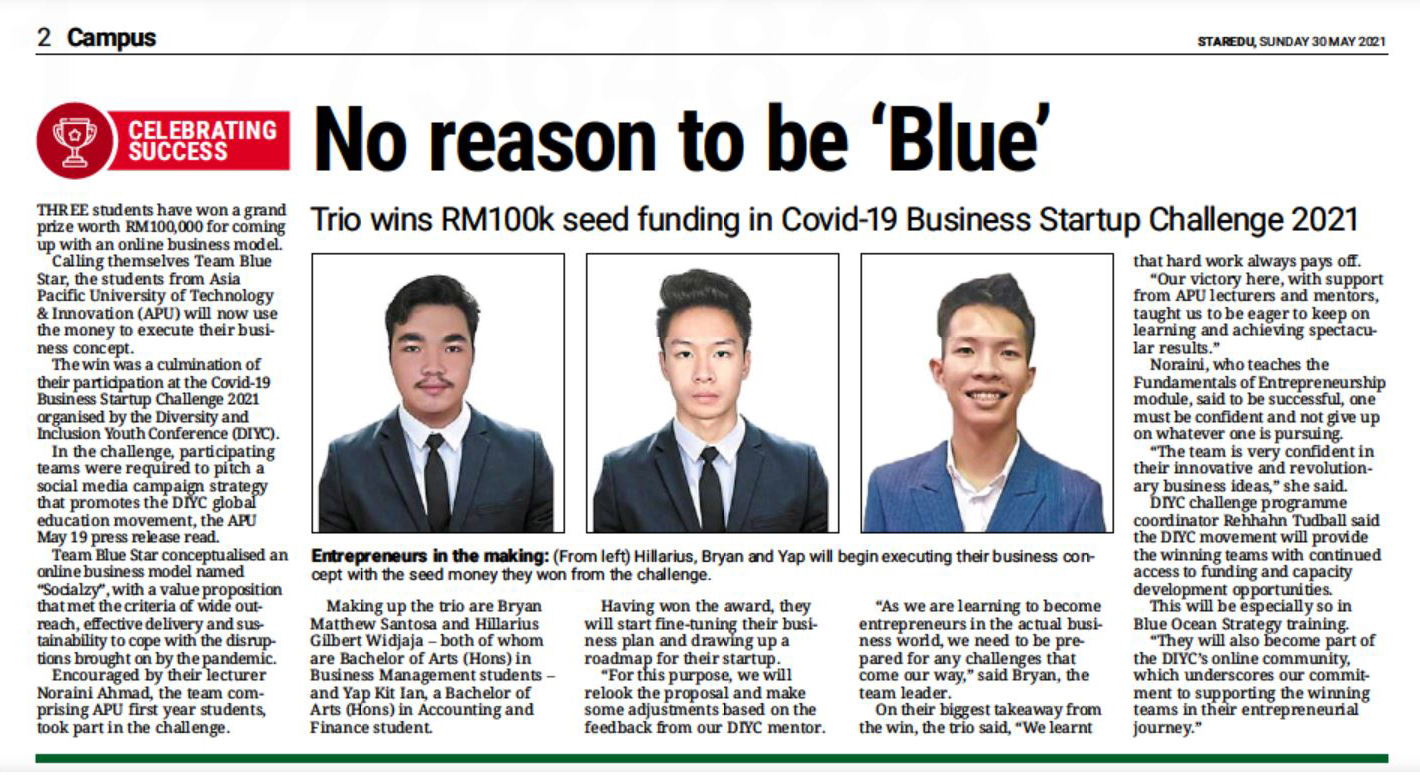 No Reason To Be ‘Blue

THREE students have won a grand prize worth RM100,000 for coming up with an online business model.

Calling themselves Team Blue Star, the students from Asia Pacific University of Technology & Innovation (APU) will now use the money to execute their business concept.

The win was a culmination of their participation at the Covid-19 Business Startup Challenge 2021 organised by the Diversity and Inclusion Youth Conference (DIYC).In the challenge, participating teams were required to pitch a social media campaign strategy that promotes the DIYC global education movement, the APU May 19 press release read.Team Blue Star conceptualised an online business model named “Socialzy”, with a value proposition that met the criteria of wide outreach, effective delivery and sustainability to cope with the disruptions brought on by the pandemic. READ MORE 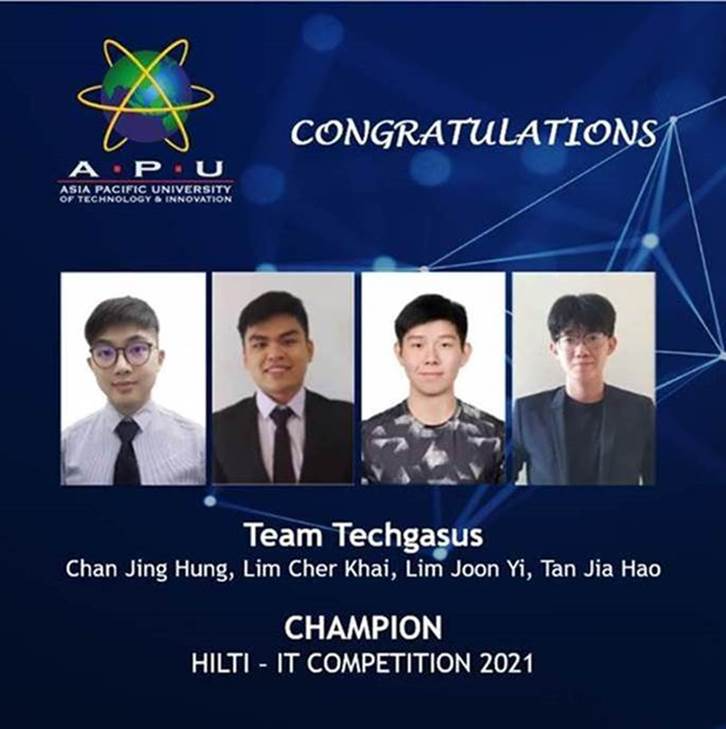 At the recently concluded Hilti Global IT Competition 2021, APU students have crowned Champion on the global standards once again, defeating over 200 candidates from 43 countries! A total of 3 APU teams competed in this competition and 2 teams from APU namely “Team Techgasus” And “Team Dealracks” emerged to the top 6 finalists while Team Techgasus finished off as the CHAMPION demonstrating outstanding performance in their field. It is also worth recalling that 2 of our teams have also previously attained Championship and 1st Runner-Up during the Hilti IoT Competition back in 2020. READ MORE 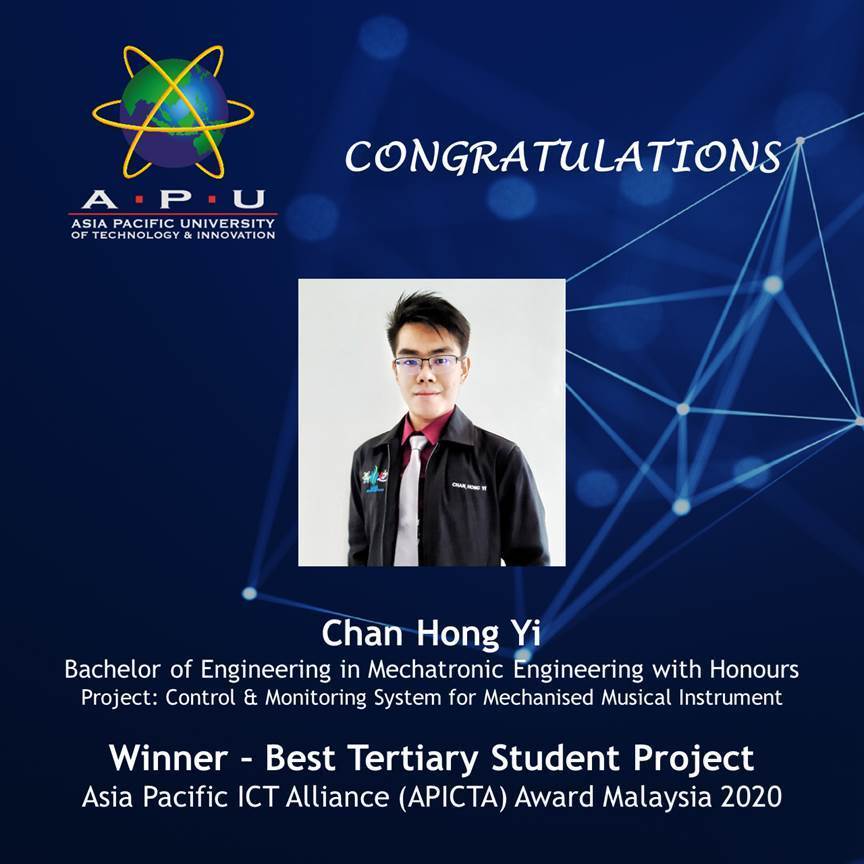 We are delighted to announce that our student – Chan Hong Yi, who recently achieved a First-Class Honours in Mechatronic Engineering, blew away the competition by winning the ‘Best Tertiary Student Project’ Award with his unique project “Mechanised Musical Instruments” in the 21st Asia Pacific ICT Alliance (APICTA) Awards 2021. A total of 6 teams from APU competed in APICTA and 3 teams were shortlisted for the finals. We have been demonstrating our excellence in ICT at the APICTA Awards arena over the years, thus it is worth to note that this is our 20th APICTA trophy since 1999!
READ MORE